The villa in Juodkrantė, „Kuršių kiemas“, was built in the late 19th century and at the time was known as „Hotel Bachmann“, later “Miškas“ and „Tel-Aviv“. 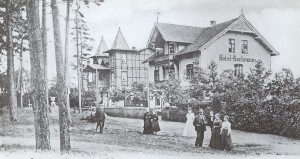 At present times, the villa is newly reconstructed and has all the necessary amenities. The rooms are equipped with satellite TV, telephone and wireless internet, mini kitchen-bar, modern bathrooms. The lovers of active free time are offered to rent bikes or fishing kits. The fans of billiards can play pool. There is a separate parking area for the hotel guests. Just a few minutes away from villa you will find a well-equipped outdoor fitness area.

Our friendly staff will make sure that you have a relaxing time here: they will wash your clothes, order tickets on your request, organize special evenings, etc.
The villa can offer a conference hall for groups of 25-30 people.

Villa “Kuršių kiemas” was built in an exceptional geographical area: a peaceful piece of land in between a forest and the sea (15-20 min), close to the Curonian lagoon (5 min.). As the hotel stands on its own land, you will have the opportunity to organize a barbeque outside and grill your own meat, or fish, caught in the Curonian lagoon.

You won’t be bored at Juodkrantė as it has a lot of tourist attractions: the Witch mountain, Nagliai reservation, Sculpture Park, and in order to please the kids, you can take them to the Sea museum and Dolphinarium. It has become a tradition to spend the evenings on the newly reconstructed quay (2 km long) which has a great bike path.

All the rooms are fully reconstructed and have all the amenities: modern bathrooms, telephones, satellite TV, wireless internet. The rooms are comfortably furnished, most of them have balconies.