Curonian lagoon is a unique and distinctive piece of land in the very center of Europe which was preserved by enthusiasts. In 1961, a town was built on the Lithuanian part of Curonian Spit, and a new name appeared on the map – Neringa.

Neringa is one of the most beautiful resorts in the Baltic Sea region. A big part of tourists visiting Lithuania, come to this pearl of the Baltics. In 2000, Curonian Spit was included into UNESCO World Heritage List as a cultural landscape. The sand dunes with their rare flora, the seaside forest with centuries old trees and mountain pines planted by people, the white sand beaches, beautiful and well developed city infrastructure (streets, quays, old tow with its unique architecture), the smell of smoked fish, plentitude of cultural and sport events – these are the main characteristics of this land, which make it attractive to Lithuanian as well as foreign tourists.

Juodkrantė is the second biggest town of Neringa region, situated on the coast of the Curonian Spit (Neringa), in between the high parabolic dunes. When boating, this territory looks very dark, so it is believed that its name originated from two words “black” (“juodas”) and “shore” (“krantas”).
In 1429, Juodkrantė was first mentioned in written sources, in 1854-55, amber was first found here and 2250 tons of it were unearthed. In 1861-1882, some valuable, pre-historic amber artefacts were found. Before the World War II, Juodkrantė was famous as a resort of European level. At present times, it offers relaxing and peaceful vacation in Curonian Spit. 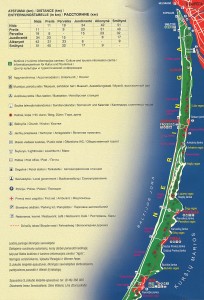